Medicare World can easily save you half a grand or more on your healthcare expenses!

According to a study from the Kaiser Family Foundation (KFF), 57 percent of Medicare beneficiaries do not review nor compare coverage options annually. This seemingly insignificant chore has costly ripple effects on Medicare beneficiaries. With Open Enrollment halfway done (ends on December 7), you should know your options! Here is what the study proved.

In 2018, 43 percent of all Medicare beneficiaries reported they review or compare Medicare coverage options at least once every year, and 57 percent reported that they do not review or compare options annually. The other group includes 24 percent who never compare plans, 22 percent of beneficiaries who rarely compare plans, 8 percent who compare once every few years, and 3 percent who compared only once when they first signed up for Medicare or their Prescription Drug Plan (Figure 1; Table 1). 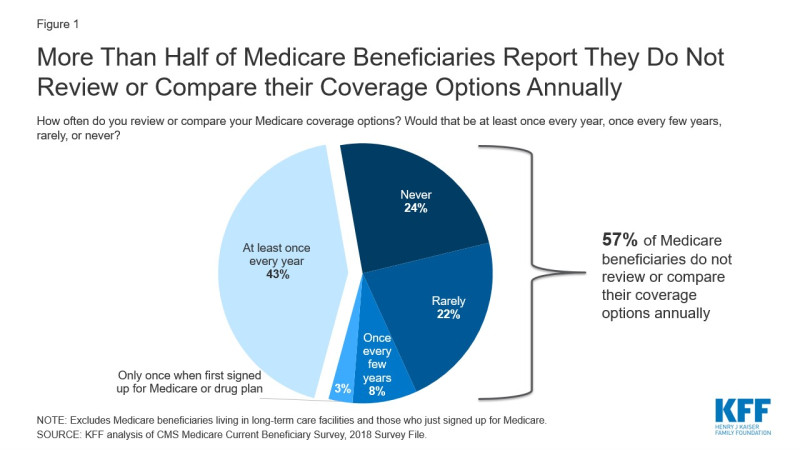 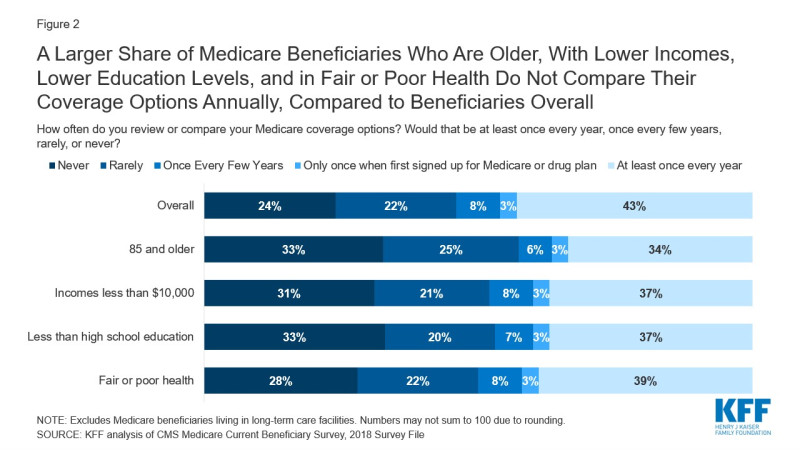 Conclusion of the study: Compare your options!

The study proved that those who may have the most at stake during the open enrollment period, such as those in relatively poor health, are least likely to compare their plan options, which can lead to unanticipated outcomes, such as higher out-of-pocket costs. Moreover, a relatively small share of beneficiaries uses Medicare’s official information resources which are designed to support informed decision-making.

With a growing number of Medicare private plan choices available each year, the fact that such a large share of seniors and people with disabilities are not comparing coverage options each year warrants attention, given the potential consequences of these decisions.

Each year, your Part D or Medicare Advantage plan is required to provide you with a “notice of change”. (At this time of the year, you should already have access to that document!) Your plan will outline the changes in coverage you can expect. While those may end up being minor in nature, they could also be significant.

For example, Nancy Williams, 73, had a Part D drug plan. She was notified that one of the medications she was on had now been grouped into a higher tier, resulting in a much higher copay for her. Nancy’s Part D plan had not negatively affected her in years. She learned to never assume that her plan wouldn’t change. She ended up switching drug plans and it saved her big time!

Of course, the opposite could happen, as well — your Medicare plan might change for the better. If you were thinking of switching plans because you’re unhappy with your current coverage, it pays to see if your notice of change has information that sways you to retain the plan you have. Be like Nancy and make sure you are getting the best bang for your buck!

Find a Medicare Plan Near You!

Speak to a licensed broker who can help you look for plans.

Find a Medicare Plan Near You!

Speak to a licensed broker who can help you look for plans.