Drug company CEOs are coming under fire for promising Trump, Congress, and the American public lower drug prices, but doing the exact opposite by raising prices and their take-home pay instead.

Pfizer’s Ian Read is one of the drug company CEOs receiving scrutiny. Within a three-week period at the beginning of 2019, Pfizer raised the price of 116 drugs as much as 9.46 percent. Read’s compensation in 2017 was $17.3 million, but it has since risen to $27.9 million.

Pfizer’s board defended this pay raise, stating it was part of an incentive package to prevent Read from retiring when he turns 65 in May. Another factor in this salary boost is the hike in prices of drugs like Viagra, Lipitor, Zoloft, and Chantix. Pfizer had two waves of drug price increases in January and June of 2017. In January, Pfizer hiked the prices of 91 drugs by an average 20 percent.

A Pfizer spokesperson defended the price increases, saying the company “takes a measured and responsible approach to pricing.”

Ian Read is among the highest paid drug company CEOs in the United States, but he’s only number eight on the list of the top 10. 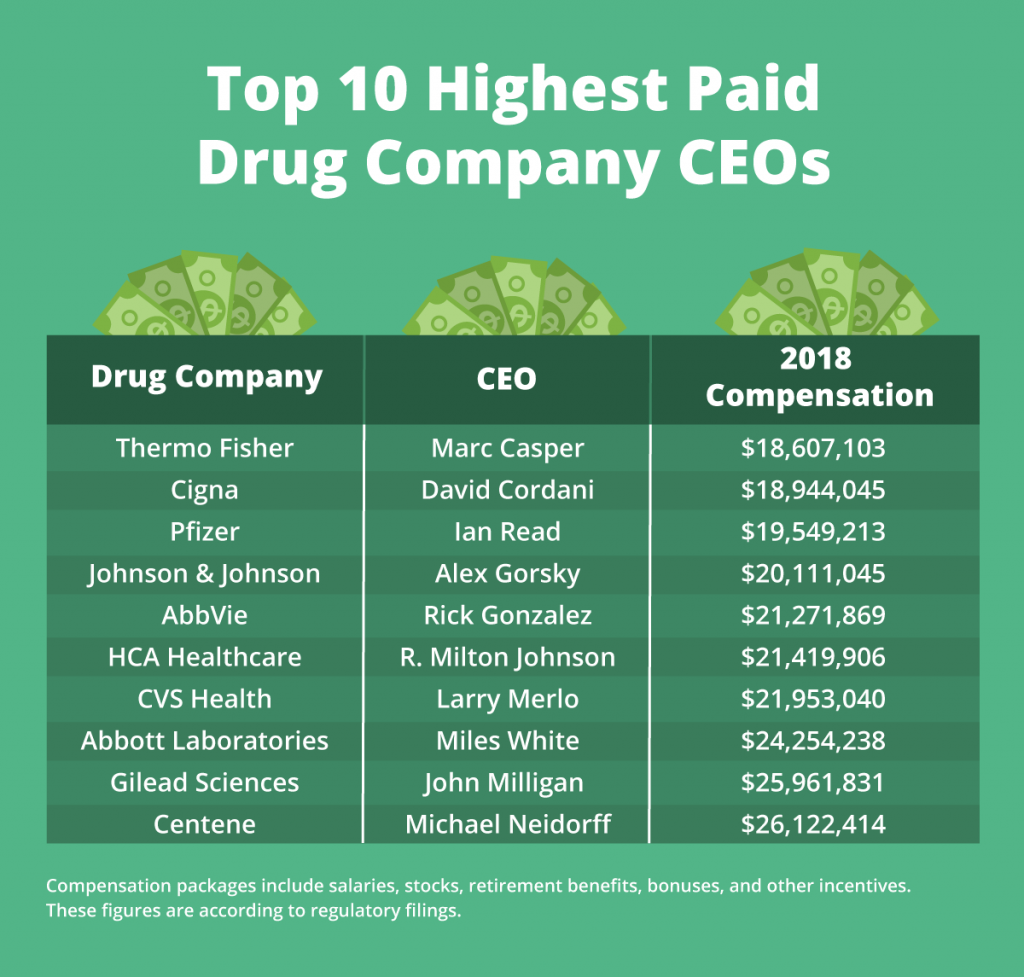 Some of the industry’s top executives testified before Congress in late February of 2019 as part of a drug pricing hearing. These executives admitted that the system is broken, indicting things like high copays and pharmacy benefit manager (PBM) rebates, but none would commit to lowering drug prices. The executives represented some of America’s largest drug companies, like Pfizer, Merck, AbbVie, Bristol-Myers Squibb, Johnson & Johnson, and Sanofi.

After three hours of testimonies and questioning, Chuck Grassley, a Republican senator from Iowa and the Senate Finance Committee Chairman, admonished the executives for deflecting blame. “We’ve all seen finger-pointing,” he said. “Every link in the supply chain has gotten skilled at that. But like most Americans, I’m sick and tired of the blame game. It’s time for solutions.”

The executives also received a verbal lashing from the Committee’s ranking Democrat, Ron Wyden (OR): “You pharma executives are here because the way you do business is unacceptable and unsustainable. Drugmakers behave as if patients and taxpayers are unlocked ATMs full of cash to be extracted, and their shareholders are the customers they value above all else.”

At the close of the hearing, Grassley said he wants to hold additional hearings to investigate the troublesome relationship between insurance companies and pharmacy benefit managers.