Despite a new ruling to lower insulin prices, the insulin prices in America are still a real crisis, leading to deaths from diabetes due to people going without or rationing their insulin. This is a problem that must be changed in order for Americans with diabetes to be able to afford their vital medications.

Earlier this year the Trump administration announced a new model for Medicare beneficiaries to save money on lifesaving insulin. Medicare beneficiaries with prescription plans would pay a maximum of $35 a month starting next year, saving an estimated $446 annually. The nuisance of fluctuating cost-sharing amounts would be eliminated and replaced by a manageable sum.

Though the insulin benefit would be accessible to most Medicare recipients, it would be voluntary. This means that during Medicare enrollment this fall, it will be important for Medicare recipients to pick an insurance plan that provides it, such as Eli Lilly, Novo Nordisk, and Sanofi (top suppliers that were all involved in the agreement).

Seema Verma, head of the Centers for Medicare and Medicaid Services (CMS), said that 1,750 insurance plans that offer drug coverage to Medicare recipients have agreed to provide insulin for a maximum copay of $35 a month next year. It will be available through “enhanced” Part D plans that may cost more per month but offer additional benefits such as reduced cost-sharing on certain drugs.

But the cap on copays is expected to lead to an increase in premiums.

Importantly for patients, the new benefit would cover a range of insulin products, including pen and vial forms for rapid-acting, short-acting, intermediate-acting, and long-acting versions.

While the new Senior Savings Model is helpful, it does not apply in all scenarios. The new plan ensures only a $35 copayment on insulin products. It only applies to participating Part D plans who use an insulin product covered by their plan. It also does not take into account people who are uninsured, or insured by coverage other than Medicare Part D.

What to know before signing up

According to Boomer Benefits, these are some of the things you need to know about signing up for a plan with lower insulin copays.

There will be an option in Medicare’s Plan Finder tool to filter for plans that offer the new model.

What is going on with insulin prices and Medicare?

Around one-third of those on Medicare suffer from diabetes. Many people with diabetes rely on daily insulin injections to survive. Overall, around 3.3 million older Americans rely on insulin to manage diabetes each day.

Original Medicare only covers insulin when it’s used with a pump, in which case it’s covered under Medicare Part B as durable medical equipment. Medicare Part D covers injectable insulin.

The cost of insulin

The cost of insulin is one of the biggest worries of consumers, as drug prices continue to climb. Millions of people with diabetes use insulin to keep their blood sugar within normal ranges and stave off complications that can include heart disease, blindness, kidney failure, and amputations. It is now known that people with diabetes also suffer worse outcomes from COVID-19.

At list prices, insulin can cost more than $5,000 a year. Although insured patients do not pay that price, they do notice a rise in their copays based on the full cost.

People who can not afford their insulin may try to cope by reducing their doses, a dangerous calculation that can put their lives in jeopardy. Do not lower your insulin dose without talking to your doctor first.

A new Kaiser Family Foundation report on insulin and Medicare found that: 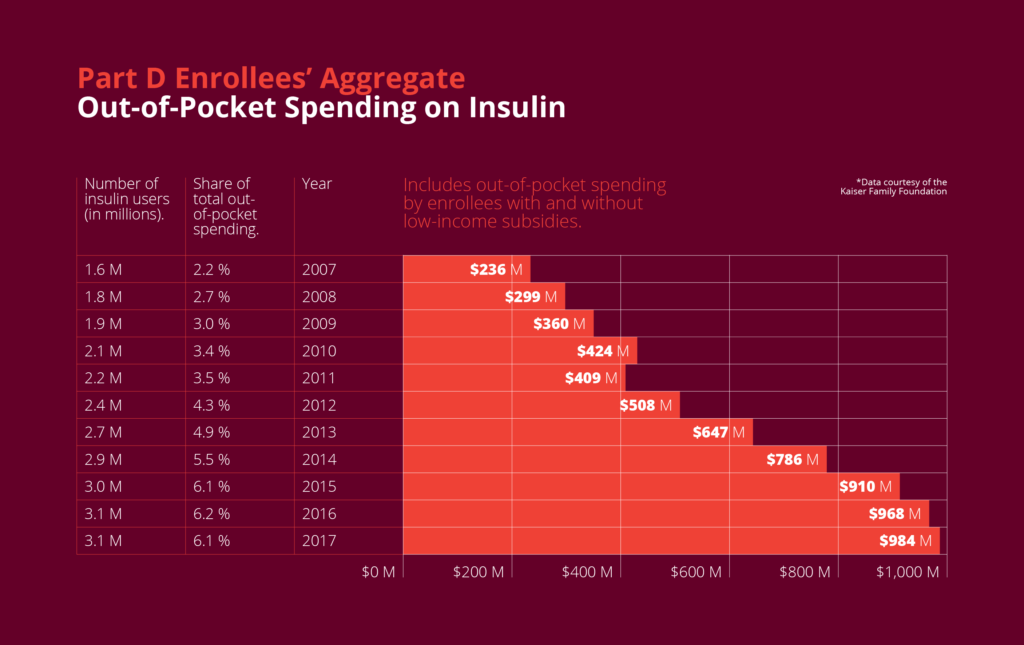 There are several bills in the works to cut down on the cost of insulin. Major insulin manufacturers also offer financial assistance programs to help people with diabetes with costs. Costs of insulin are high enough, without taking into account the costs for supplies and other medications each month.

Insulin isn’t the only drug whose price has been climbing exponentially in the U.S. Other drugs that are expected to shoot up in price in 2020 include Revlimid (multiple myeloma), Tecfidera (multiple sclerosis), and Janumet (diabetes).