In April, Senator Bernie Sanders (I-VT) and 14 of his Democratic colleagues released Sanders’s latest version of the Medicare for All bill to create a national health insurance program in the United States.

Many Democrats in Congress support this bill, but not all of them. In fact, several high-ranking Democratic Senators who don’t support the bill coincidentally have been accepting money from pharma and insurance lobby groups for decades.

According to OpenSecrets, several high-ranking Democrats have been accepting money from healthcare lobbyists for decades, and this may have influenced their support (or lack thereof) for the bill. These Senators range from establishment Democrats like Senate Minority Leader Chuck Schumer (NY), to newcomers like Senator Doug Jones (AL). 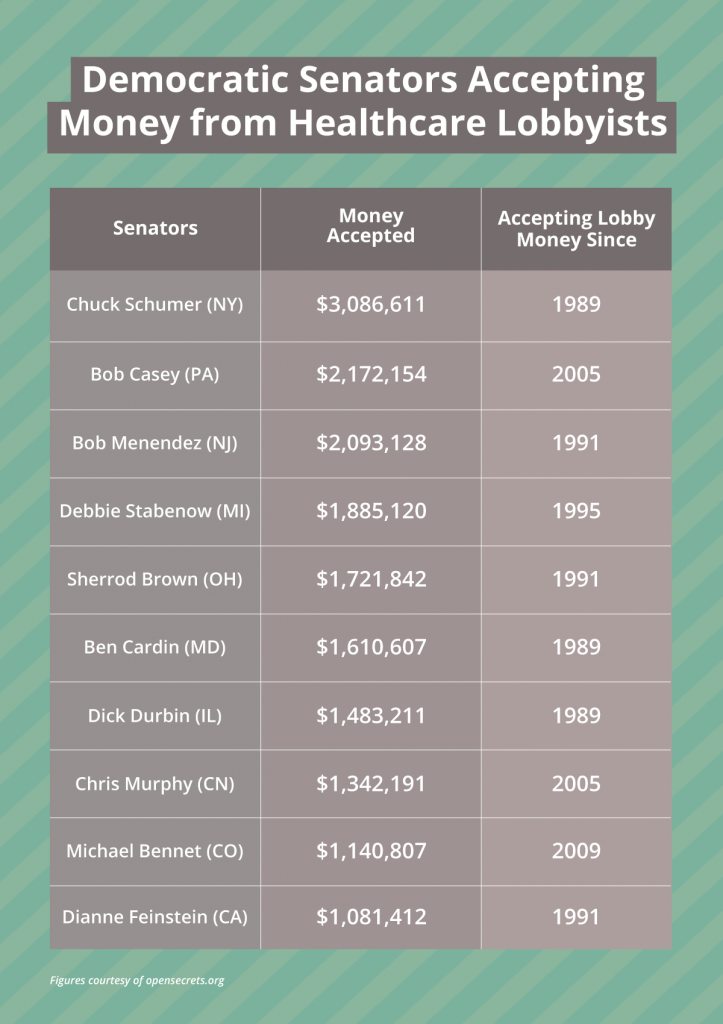 OpenSecrets is a non-profit, non-partisan group based in Washington, D.C. that researches the influence of lobbyists in American politics. Any money accepted by a politician is by law public record, and OpenSecrets is devoted to sharing that information with the nation so Americans can see where the interests of their Congress members lies.

Lobbying is the act of influencing businesses and policies in order to support a specific agenda. In America, that often means lobbyists funnel money into the pockets of politicians to persuade those politicians to back or oppose the agenda of the lobby group.

Lobbying differs from bribery in that bribery is illegal, happens on an individual level, and is usually performed under the table. Lobbying was actually created as a way to prevent bribery because lobbyists must register with the federal government, and the groups are limited to the amount of money they can spend on a single candidate.

These Senators may not support a single-payer system, but several do support Medicare reform.

The House of Representatives is currently holding public hearings for Medicare for All. The House Budget Committee, which typically does not preside over matters of healthcare, will hold a hearing in May.