As we are in the middle of the COVID-19 pandemic, our world as we know it, is changing and seemingly falling apart. This uncertainty can be overwhelming, and frankly, scary. In the midst of the unknown, we can cling to what we do know, which is our world’s history. Some of our world’s greatest minds, historians and scientists alike, are who we should be looking to for our most accurate news and statistics. Their research will provide the best resources for overcoming COVID-19.

Learning from the experts

“The response to COVID-19 requires input from anyone who has value to offer, and historians and other social scientists have much to say that is valuable about epidemics,” said David S. Jones, MD, PhD, author of “History in a Crisis– Lessons for COVID-19” in the New England Journal of Medicine,.

In an interview, Dr. Jones says, “Human societies have been coping with epidemics for as long as we have lived in cities. We have learned much about how best to respond from careful analysis of historical epidemics—for example, the current enthusiasm for social distancing arises from historical analysis of influenza in 1918.”

A pandemic is a global outbreak of disease. Pandemics happen when a new virus emerges to infect people and can spread sustainably. Because there is little to no pre-existing immunity against the new virus, it spreads worldwide, much like COVID-19. 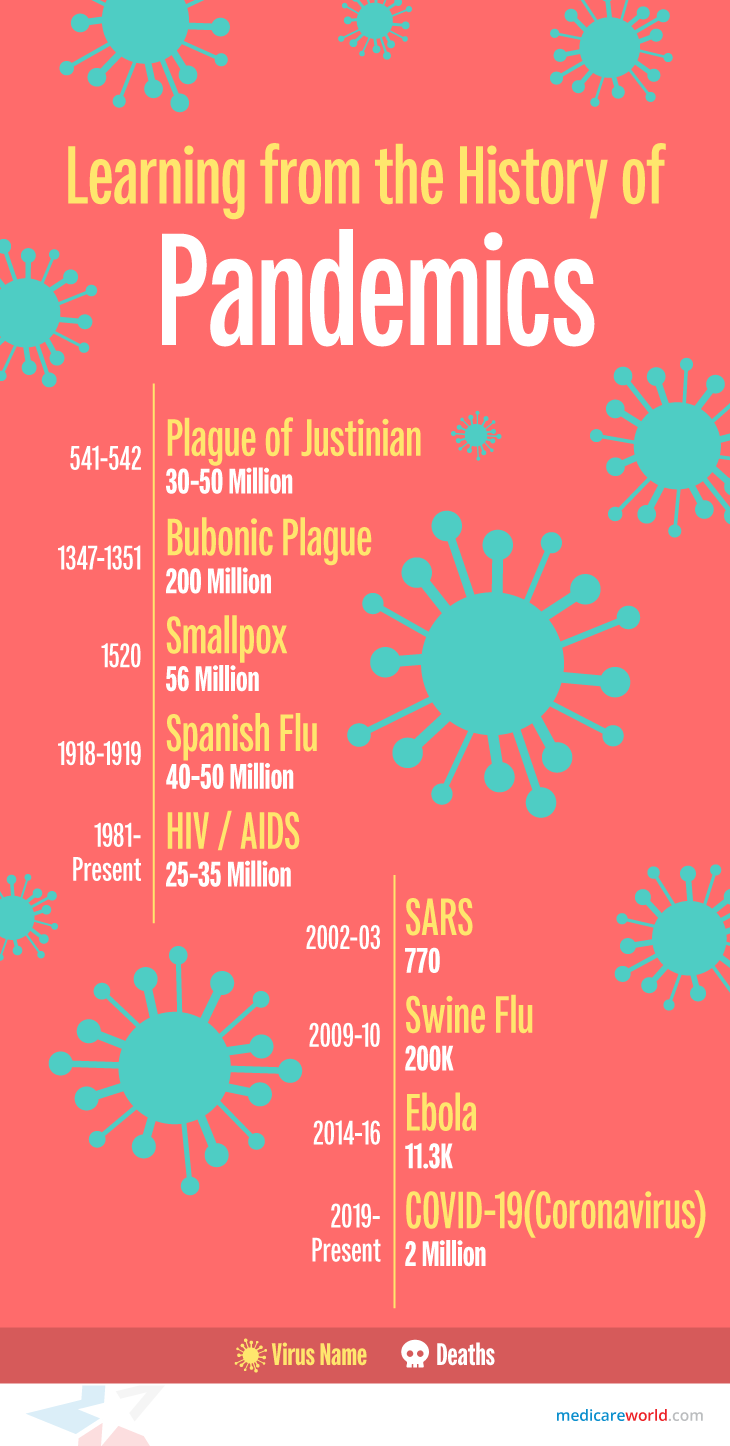 The Black Death traveled from Asia to Europe, killing a devastating estimate of 50 million people. Some estimates suggest that it wiped out over half of Europe’s population. It was caused by a strain of the bacterium Yersinia pestis that is likely extinct today and was spread by fleas on infected rodents. The bodies of victims were buried in mass graves.

This plague changed the course of Europe’s history. With so many dead, labor became harder to find, bringing about better pay for workers and the end of Europe’s system of serfdom. Studies suggest that surviving workers had better access to meat and higher-quality bread.

The polio epidemic originated in New York City and caused 27,000 cases and 6,000 deaths in the United States. The disease mainly affected children, and often left survivors with permanent disabilities.

An estimated 500 million people from the South Seas to the North Pole fell victim to Spanish Flu in the early 1900s. One-fifth of victims were part of indigenous communities, which pushed those communities to the brink of extinction. The flu’s spread and lethality was enhanced by the cramped conditions of soldiers, lack of sanitation, and poor wartime nutrition during World War I.

Despite the name Spanish Flu, the disease likely did not start in Spain. Spain was a neutral nation during the war and did not enforce strict censorship of its press, which could therefore freely publish early accounts of the illness. As a result, people falsely believed the illness was specific to Spain, and the name “Spanish Flu” stuck.

Ebola virus disease (EVD), one of the deadliest viral diseases, was discovered in 1976 when two consecutive outbreaks of fatal hemorrhagic fever occurred in different parts of Central Africa. The first outbreak occurred in the Democratic Republic of Congo, in a village near the Ebola River, hence the name of the virus. The second outbreak occurred in what is now South Sudan.

Initially, public health officials assumed these outbreaks were a single event associated with an infected person who traveled between the two locations. However, scientists later discovered that the two outbreaks were caused by two genetically distinct viruses: Zaire ebolavirus and Sudan ebolavirus. After this discovery, scientists concluded that the virus came from two different sources and spread independently to people in each of the affected areas. Ebola only lasted for 2 years, but took around 11,300 lives.

AIDS has claimed an estimated 35 million lives since first identified in 1981. Human Immunodeficiency Virus (HIV), which is the virus that causes AIDS, likely developed from a chimpanzee virus that transferred to humans in West Africa in the 1920s. AIDS was a pandemic by the late 20th century. Now, about 64 percent of the estimated 40 million living with HIV live in sub-Saharan Africa.

For decades, the disease had no known cure, but medication developed in the 1990s now allows people with the disease to experience a normal life span with regular treatment. Even more encouraging, two people have been cured of HIV, as of early 2020. According to the World Health Organization (WHO), AIDS has taken 777,000 lives, and over 37.9 million live with AIDS today.

SARS coronavirus (SARS-CoV) was identified in 2002. SARS-CoV is thought to be an animal virus from an as-yet-uncertain animal reservoir, rumored to be bats, that spread to other animals (civet cats) and first infected humans in the Guangdong province of southern China in 2002. An epidemic of SARS affected 26 countries and resulted in more than 8,000 cases in 2003. Since then, a small number of cases have occurred as a result of laboratory accidents or, possibly, through animal-to-human transmission in Guangdong, China.

Transmission of SARS-CoV was primarily from person to person. The symptoms appeared  during the second week of illness, which corresponds to the peak of the virus. This is unusual because two weeks is normally when cases with severe disease start to deteriorate clinically. Most cases of human-to-human transmission occurred in the healthcare setting, in the absence of adequate infection control precautions. The implementation of appropriate infection control practices brought the global outbreak to an end.

The 2009 swine flu pandemic was caused by a new strain of H1N1 that originated in Mexico in the spring of 2009, before spreading to the rest of the world. In one year, the virus infected as many as 1.4 billion people across the globe and killed almost 600,000 people, according to the Centers for Disease Control and Prevention (CDC).

The flu pandemic primarily affected children and young adults, and 80 percent of the deaths were in people younger than 65, the CDC also reported. This was unusual for influenza, considering that most strains of flu viruses, like the seasonal flu, cause the highest percentage of deaths in people ages 65 and older. But in the case of the swine flu, older people seemed to have already built up enough immunity to the group of viruses that H1N1 belongs to, so they weren’t affected as much. A vaccine for the H1N1 virus that caused the swine flu is now included in the annual flu vaccine.

“When” is now: Learn more about pandemics from your couch at home

The Netflix series, Pandemic: How to Prevent an Outbreak is a documentary series that was ironically released in January of 2020. It begins with the theory: “We’re due for a new, fast-moving deadly virus.” It’s been 100 years since a deadly influenza virus killed an estimate of more than 50 million people, at a time when the global population was just two billion. Now there are nearly eight billion people in the world. As expert Dr. Dennis Carroll, director of USAID’s Emerging Threats Unit, warns in Pandemic: “When we talk about another flu pandemic happening, it’s not a matter of if, but when.”

Seniors: Why Not to Buy or Sell Fake COVID-19 Vaccine Cards