Flu season is upon us, and seniors should be especially cautious when it comes to this contagious virus. The influenza virus (or flu) has symptoms similar to a cold at the beginning, but symptoms can rapidly progress and create severe health complications if not treated promptly, especially for seniors.

Seniors and the flu

According to the Centers for Disease Control and Prevention (CDC), between the years of 2010 and 2016, an estimated 12,000 to 56,000 people died every year due to flu complications. Additionally, between 70 and 85 percent of the deaths caused by flu complications occur to people over 65, and up to 70 percent of flu-related hospitalizations happen to people of the same age group.

Only one-third of seniors get the flu shot every year despite how effective the vaccine can be and how dangerous the virus is to seniors. Another reason why seniors suffer more from the flu is because of weakened immune systems due to either old age or medications like steroids and immunosuppressants. The government aims to increase flu vaccines among seniors to 90 percent by 2020.

The flu can be carried by humans, some mammals, and birds, making it easy for the virus to spread across the world with relative ease.

There are three main types of the flu:

You can get a flu shot from healthcare locations like a doctor’s office, pharmacy, blood-testing lab, or shot clinic. Flu shots are covered by Medicare and most health insurance providers.

Possible side effects include:

The flu shot contains traces of an egg protein called ovalbumin. People with egg allergies are still encouraged to get the flu shot; however, they will need to be monitored for at least 30 minutes after the injection in case of an allergic reaction.

A flu vaccine nasal mist is an alternative to the flu shot, but it is not recommended for seniors as it is not as powerful and effective as the shot.

The flu can sometimes present itself as a common cold in the early stages (fever, runny nose, sore throat), but symptoms progress very quickly. Common symptoms of the flu include:

With proper treatment and medication, the flu could last about two weeks. However, if not treated promptly, it could create much more dangerous complications, especially for seniors.

Find The Cheapest Medicare Plan Available For You

Compare plans from all the biggest providers to find the right deal for you.

Find The Cheapest Medicare Plan Available For You

Compare plans from all the biggest providers to find the right deal for you.

How to prevent the flu

The best way to prevent the flu is to get a vaccine, which is 60 percent effective. You can also prevent the flu by leading a healthy lifestyle, avoiding sick people, getting other vaccines, and seeking medical help immediately if you are feeling ill.

Get Free Quotes from Top Brands.

MediQuote works with the top insurance carriers to find the best Medicare plans for you! 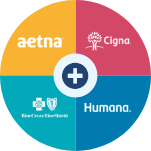 Get Free Quotes from Top Brands

MediQuote works with the top insurance carriers to find the best Medicare plans for you!

What Medicare Covers for Dialysis

Biden Tells Americans to ‘Mask Up!’

Drug Industry Take Advantage of COVID-19, Raising Your Prices Without You Knowing