Under the best-case scenario presented on Tuesday, more Americans will die from the Coronavirus in the weeks and months to come than died in the Korean and Vietnam Wars combined.

Five weeks ago there were 60 confirmed cases of the Coronavirus in the United States and President Trump was expressing very little alarm. He was claiming it was just like the flu. As of yesterday the death count rose to 4,600 and Vice President Pence issued an ominous warning that America’s situation is heading in the direction of exceeding Italy’s struggle with the virus. Italy has seen over 13,000 from Coronavirus and is weeks ahead in the viral process. President Trump has changed his assessment drastically and is now warning that this in fact is not the flu. The flu and the new Coronavirus may have similar symptoms, but the latter is far deadlier.

Trump has gone from telling America that all was under control and claiming all would miraculously disappear, to reversing his original plan to have the country reopen by Easter and prolonging the quarantine mandates until April 30th, as of now.

“I want every American to be prepared for the hard days that lie ahead,” the president said, the first real acknowledgement of the disease and death the country is to expect in the upcoming weeks. “We’re going to go through a very tough two weeks.

Under the best-case scenario presented on Tuesday, more Americans could die from the Coronavirus in the weeks and months to come than Presidents Harry S. Truman, Dwight D. Eisenhower, John F. Kennedy, Lyndon B. Johnson and Richard M. Nixon saw die in the Korean and Vietnam Wars combined. 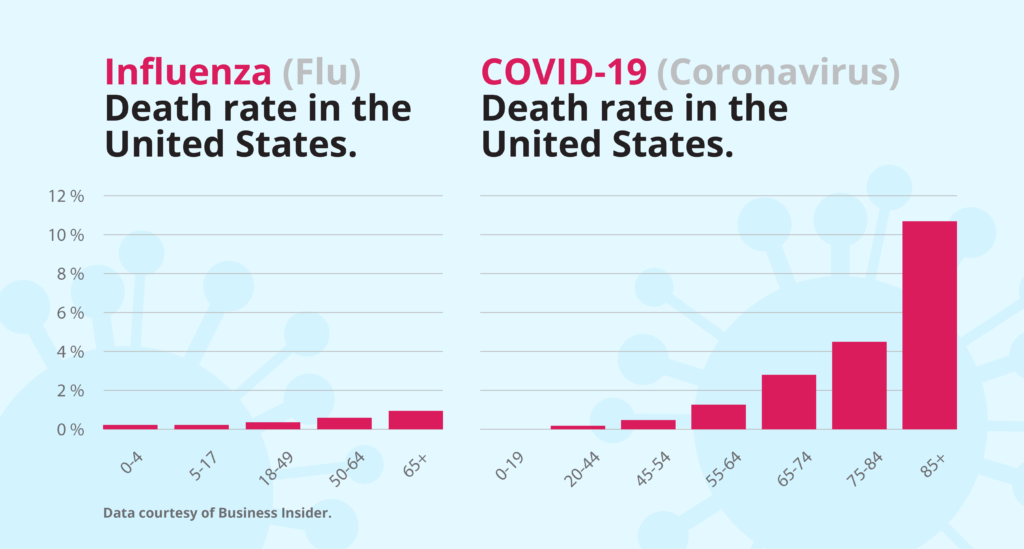 Outbreaks among elderly populations in the US have proven especially tragic. Because the Coronavirus spreads via droplets when people are in close contact and is deadliest for people over 80, nursing homes can be dangerous breeding grounds. The first COVID-19 outbreak was actually in the Life Care Center in Kirkland, Washington, killing 37 of the 120 people living there.

Many states, including Washington, Mississippi, and New York, have banned visitors from nursing and retirement homes. Amidst the Coronavirus,to visit loved ones in nursing homes, or assisted living, people have been getting creative. Some have resorted to visiting their loved ones by going to the windows of their rooms, talking on the phone with a glass between them for precautions.

Will Trump Expand Medicare to Help the Uninsured During the Coronavirus Pandemic?

Biden Tells Americans to ‘Mask Up!’

Drug Industry Take Advantage of COVID-19, Raising Your Prices Without You Knowing